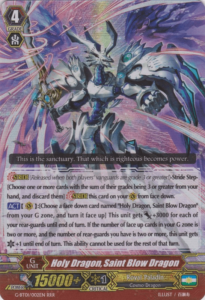 This is a sanctuary. Where justice becomes power.

Stride (Release it when both you and your opponent have a grade 3 or greater vanguard!)-Stride step-[Choose one or more cards with the sum of their grades being 3 or greater from your hand, and discard it] Stride this face down card on your (VC).
[ACT](VC):[Choose a face down card named “Divine Sacred Dragon, Saint Blow Dragon” from your G Zone, and turn it face up] This unit gets [Power]+3000 for each of your rear-guards until end of turn, and if the number of face up cards in your G Zone is two or more, and the number of rear-guards you have is two or more, this unit gets [Critical]+1 until end of turn. This ability cannot be used for the rest of that turn.

The Royal Paladins are famous for wielding justice in Cray’s darkest hours. Divine Sacred Dragon, Saint Blow Dragon protects the portal to an alternate dimension. The guardian dragon sacrificed himself to the portal against raging dragons, and today his soul lives within humans and Sanctuary Guard Dragon. He is one of the first four G Units for Royal Paladins, and of course they are going to be one of the first clans to get a G Unit.

Divine Sacred Dragon, Saint Blow Dragon uses Royal Paladin’s tactics to perfect like Alfred as he gains power when surrounded with his allies. He gains 3K power for each rear-guard, and gains an additional if your G zone has two face up cards and you have two or more rear-guards. He easily becomes a 49K attacker with two criticals when he has an 11K vanguard as his heart, five rear-guards and Little Sage Marron as the booster.

Furthermore, your formation should consist of offensive units. Saint Blow Dragon’s pressure can be heighten by having threatening columns. Full Bloom Seeker, Cerdic, Heaven Bow Seeker, Morvi, or Natural Talent Seeker, Valrod should be in the front row. If your opponent blocks your Stride attack, then you can give Triggers’ effects to your rear-guards. Silent Sage, Sharon is an interesting Trigger to add to the deck because she can stand a rear-guard for an additional attack, and you can put her in the Soul to add fuel Thing Saver Dragon’s Legion skill.

Finally, Seekers now have a stronger finisher with early pressure to lead to the final turn. Saint Blow Dragon can be used during the mid-game to give early pressure, and Seeker, Thing Saver Dragon’s superior Legion skill can be used as a devastating finisher with three consecutive Legion attacks in one turn. Saint Blow Dragon’s second attack will also be able to attack with two criticals.