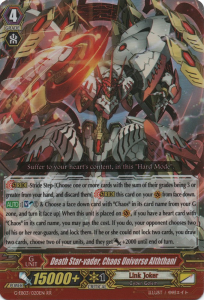 Suffer to your heart’s content, in this “Hard Mode”.

[Stride]-Stride Step-[Choose one or more cards with the sum of their grades being 3 or greater from your hand, and discard them] Stride this card on your (VC) from face down.
[AUTO]:[Soul Blast (1) & Choose a face down card with “Chaos” in its card name from your G zone, and turn it face up] When this unit is placed on (VC), if you have a heart card with “Chaos” in its card name, you may pay the cost. If you do, your opponent chooses two of his or her rear-guards, and lock them. If he or she could not lock two cards, you draw two cards, choose two of your units, and they get [Power]+2000 until end of turn.

Death Star-vader, Chaos Universe Alththani’s skill forces your opponent to choose two of his or hear rear-guards to lock. If he or she is unable to lock two rear-guards, then you draw two cards and give 2,000 power to two of your units. You will be able to draw two cards and give power if your opponent is only able to lock one card because they must two lock cards to prevent you from gaining an advantage. This skill punishes players for withholding cards early in games to avoid being locked. Their strategy is wise for protecting their cards for offense, but it enables you to build resources from Death Star-vader, Chaos Universe Alththani. 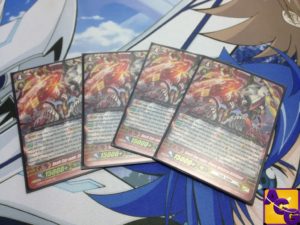 Furthermore, your opponent is forced to choose one of two bad scenarios. First, he or she can call units prior to your Stride for you can lock them and not be able to draw to cards. He or she can minimize their limitations by locking rear-guards in the back row. Second, he or she will not call units prior to your Stride and allow you to draw cards. Your opponent will be able to generate offense on their next turn if he or she conserves units in his or her hand.