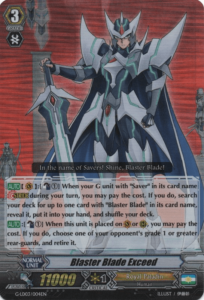 In the name of Saver! Shine forth, Blaster Blade!

Furthermore, Divine Knight King, Alfred Holy Saver is the best G-Unit for Blaster Blade Exceed. Your new card with Blaster Blade in its name will be able to perform a Twin Drive for his first battle. Your G-Unit already had the ability to perform Triple Drive. You will have a total of five drive checks in a single turn. This is a great skill for generating a large advantage. Your hand size will increase by five and there are many opportunities to check triggers!