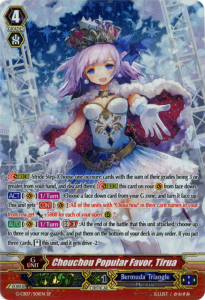 [Stride]-Stride Step-[Choose one or more cards with the sum of their grades being 3 or greater from your hand, and discard them] Stride this card on your (VC) from face down.
[ACT](VC)[1/Turn]:[Choose a face down card from your G zone, and turn it face up] This unit gets “[CONT](VC):All of the units with “Chouchou” in their card names in your front row get [Power]+5000 for each of your open (RC).”.
[AUTO](VC)[1/Turn] Generation Break 3:At the end of the battle that this unit attacked, choose up to three of your rear-guards, and put them on the bottom of your deck in any order. If three cards were put, [Stand] this unit, and it gets drive -2.

I feel in love with the Chouchou archetype last summer. I have amazing luck and skills with the deck. My version of the deck has a very high winning percentage. Their style is unique for Bermuda Triangle. They return units to the deck to draw cards and gain new skills. Chouchou Popular Favor, Tirua is the queen of the Chouchou. Tirua has finally revealed her future form. She is a regal beauty with amazing skills.

Chouchou Popular Favor, Tirua’s first skill gives 5,000 power to all units with Chouchou in their names. Opponents were able to withstand Chouchou’s original cards because they lack power. Their problem is finally resolved. Tirua gives much needed offense to the deck. This additional power may be desired if you do not have boosters after returning rear-guards to the deck to activate skills. Your rear-guards can hit your opponent’s vanguard. This skill helps when Chouchou Popular Favor, Tirua prepares for her second attack.

Finally, Chouchou’s new cards strongly assist Chouchou Popular Favor, Tirua. Chouchou, Ranfa benefits from this skill. Her skill activates and she stands after a rear-guard is sent back to the deck. Her skill gives another opportunity to defeat your opponent. She also gains 5,000 power. Her power will be 19,000 with the combination of her skill and Chouchou Popular Favor, Tirua’s skills.

Overall, Chouchou Popular Favor, Tirua is the final piece of Chouchou’s greatness. The deck was only lacking offense, and it was able to win a lot of games for me because its defense is already awesome. The offense makes Chouchou the best archetype in Bermuda Triangle for the Premium Format. These mermaids are able to deal heavy damage. Opponents will be forced to drop a lot more cards to block your rear-guards’ attacks. Enjoy the performance from Chouchou Popular Favor, Tirua.