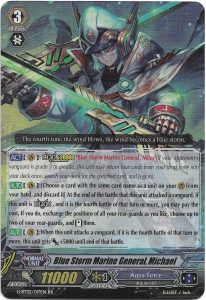 The fourth time the wind blows, the wind becomes a blue storm.

Blue Storm Marine General, Michael is another general in the Aqua Force’s naval forces. He has new state of the art weapons. He was led by the legendary Maelstrom in the Blue Storm Armada. He shows no mercy to his weak enemies. He is the third Aqua Force unit to have the Legion ability. His abilities work well with Tetra Burst and Zeharias.

Legion Skill is a persona blast and it stands two of your rear-guards for two more attacks. You may also rearrange your formation in any positions. This ability gives you two additional attacks for the turn! You should be able to get at least six attacks in a single turn. His second skill gives him an additional 5,000 power when he attacks in the fourth battle of the turn. This ability works with the first skill as it also activates during the fourth battle.

Play Milos, Tidal Assault or Magnum Assault to set up your fourth attack for Michael. Blue Storm Marine General, Milos is the Michael’s Legion Mate and he has the same skill as Tidal Assault. The only exception is Milos’s skill requires your vanguard to be in Legion to activate his ability. You can pressure your opponent early in the game before Legion with Tidal Assault. Then Michael will gain the 5,000 power boost from his second skill.

Blue Storm Marine General, Ianis is a great card to play with Michael. You may draw a card when his attack hits a vanguard. He is the deck’s game changer. Aqua Force’s weakness is it small hand size. Ianis’s skill does not require your vanguard to be in Legion. His skill activates in the third or more battle of the turn. He gives you two opportunities two draw cards if his attacks hit the opposing vanguard.