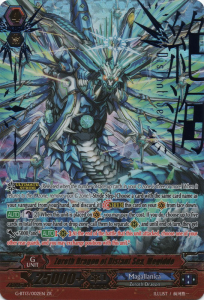 [Ultimate Stride] (Released when the number of face up cards in your G zone is three or more! When it returns to the G zone, remove your G zone!)-Stride Step-[Choose a card with the same card name as your vanguard from your hand, and discard it] Stride this card on your (VC) from face down.

[AUTO]:[Counter Blast (2)] When this unit is placed on (VC), you may pay the cost. If you do, choose up to five cards in total from your hand and drop zone, call them to separate (RC), until end of turn, they get [Power]+5000, and “[AUTO](RC):At the end of the battle that this unit attacked, choose one of your other rear-guards, and you may exchange positions with this unit.”.

Zeroth Dragon of Distant Sea, Megiddo superior calls five cards from your hand or drop zone, each unit gains 5,000 power. They may exchange positions after their attacks. Then, Players are able to attack more than the average of three times in a single turn. At least five attacks should occur in battle. This massive wave of attacks is difficult to defend against. Every rear-guard received power, and do not need a booster because of the increase of power from the skill. This skill has chemistry with every clan from Magallanica.

First, Aqua Force specializes in creating additional attacks in combat. You easily have more than five attacks per turn. Battle Siren, Cipla is one of the best cards to play with Thavas. She is a rear-guard with 11,000 power at all times with Thavas as your vanguard. She also gains 3,000 power in the 2nd and 4th waves. Her power becomes 19,000 with Zeroth Dragon of Distant Sea, Megiddo.

Second, Granblue’s second hand is the drop zone. There are many options to choose from. Ruin Shade sets up your strategy. She sends two cards in your drop zone when she attacks an opponent’s vanguard, and she gains 2,000 power. You want her skill to send grade 2 cards to use for your Ultimate Stride. They generate enough power to hit your opponent’s vanguard. Ruin Shade has 16,000 power with Zeroth Dragon of Distant Sea, Megiddo’s skill.

Third, I cannot overlook the ladies from Bermuda Triangle. My only Bermuda Triangle deck features Chouchou. Chouchou, Lirun is one of the best units to call with Zeroth Dragon of Distant Sea, Megiddo’s skill. She gives resist to all grade 2 or greater cards with Chouchou in their names. Your opponent is unable to burn your rear-guards with Flame Wing Steel Beast, Denial Griffin, or lock your rear-guards with Large Wheel of the Cosmos, Cosmo Wreath.

Overall, Zeroth Dragon of Distant Sea, Megiddo is a fiercesome card. He has characteristics from all three clans from Magallanica. First, he superior calls units from the hand for Bermuda Triangle. Second, he superior calls units from the drop zone for Granblue. Third, he exchanges positions in battle for Aqua Force. He must be in every deck for his respected nation. He is just too good to pass on if you own a copy of his card. Defeat your opponents with powerful waves from Zeroth Dragon of Distant Sea, Megiddo!