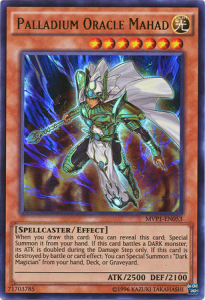 The History of Dark Magician

Mahad is one of the six priests under Pharaoh Atem, and wielded the Millennium Ring. He was also Mana’s teacher in the art of magic. He sacrificed his life to protect Atem  Thief King Bakura in a battle. Mahad used his Ba and his Ka to become the Dark Magician. Mahad continues to serve Atem in spirit as the Dark Magician in Yugi’s deck.

Palladium Oracle Mahad’s first effect special summons him when you draw him. This skill is amazing because you do not require resources to play him. You can focus on your resources on other cards in the deck. He basically plays himself when you draw him. You gain a strong monster with 2,500 ATK, and he can destroy many monsters in this game.

Palladium Oracle Mahad’s second effect doubles his ATK when he battles a DARK monster. His ATK rises to 5,000! His effect provides effective offense against opponents with dark monsters. Furthermore, Palladium Oracle Mahad is a useful card to play when your opponent has a strong DARK monster the field. He can destroy very strong cards such as Blue-Eyes Chaos MAX Dragon and Red-Eyes Darkness Metal Dragon.

Finally, Palladium Oracle Mahad is a level seven monster, and this means he can be used as material for some of the best XYZ monsters in the game. His first effect makes this strategy a lot easier. You do not need to use resources to summon him on the field. You can use your resources to summon another monster such as Dark Magician. Then, use Dark Magician and Palladium Oracle Mahad as material to special summon a rank seven XYZ monster.