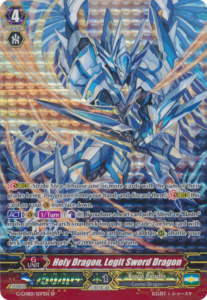 The swords of glory gather here.

[Stride]-Stride Step-[Choose one or more cards with the sum of their grades being 3 or greater from your hand, and discard them] Stride this card on your (VC) from face down.
[ACT](VC)[1/Turn]:[Counter Blast (1)] If you have a heart card with “Alfred” or “Blaster” in its card name, search your deck for up to one grade 2 or less card with “Swordsman of Light” or “Blaster” in its card name, call it to (RC), shuffle your deck, and that unit gets [Power]+2000 until end of turn.

Alfred and Blaster Blade are getting new support in TRY3 NEXT. A lot of hype is surrounding retro Royal Paladins. We have a new G-Unit for Aichi’s avatar. Holy Dragon, Legit Sword Dragon is Blaster Blade’s legit dragon. His names continue the trend of dragons having dragon in their name twice. His art is amazing. He is in a cool pose with a huge sword in his hand. Many different decks of Royal Paladins benefit from Holy Dragon, Legit Sword Dragon.

Furthermore, you may also superior call a Swordsman of Light to the field as well. There are less options for Swordsman of Light than there are for Blasters because this archetype is still young in the game. Swordsman of Light, Blaster Rapier Laura is one of the best units to call from this skill. She is a Blaster and Swordsman of Light. Her skill is more important than her two names. Alfred gains 1,000 power at all times if she is in the same column with Alfred. Alfred will gain a defensive and offense advantage during both players’ turns. Laura resists effects from your opponent’s cards. She cannot be locked or retired by effects!

Finally, Holy Dragon, Legit Sword Dragon can be used in many decks. The most oblivious deck is Majesty Lord Blaster. His skill can superior call Blaster Blade or Blaster Dark. This will help search for your deck’s important units. King of Knights, Alfred and King of Knights’ Light Manifest, Alfred Oath benefit from the skill in their retro Royal Paladin decks. The Seekers finally have a good G-Unit to open in the game. Light Source Seeker, Alfred Exiv is one of the best Legions for Seekers.