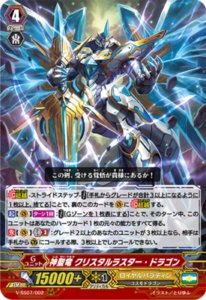 Do you have the determination to receive this sword!?

[Stride]-Stride Step-COST [Choose one or more cards with the sum of their grades being 3 or greater from your hand, and discard them], Stride this card on your (VC) from face down.
[ACT](VC)1/Turn:COST [Turn a card from your G zone face up], and until end of turn, this unit gets all of the original abilities of one of your heart cards.
[CONT](VC) Generation Break 3:If you have three or more grade 2 or greater units, when your opponent would call from his or her hand to (GC), he or she must call three or more at the same time.

Furthermore, many cards from the standard format have powerful skills and Imaginary Gifts. Some of their skills are better abilities than the abilities of cards from Cardfight!! Vanguard. You are not restricted by Generation Break from those heart cards.

In addition, you may flip any card from you G zone face up. You may play Holy Dragon, Crystaluster Dragon up to four times in a game. Flip up any other card from your G zone.

In addition, you need three or more grade 2 or greater rear-guards to activate this skill. Royal Paladins have grade 2 units with the ability to boost units. You will not lose any power from this skill’s conditions.

Aerial Divine Knight, Altmile is a great card to play with Holy Dragon, Crystaluster Dragon. You may superior call grade 2 units from the deck and drop zone. Your field is gaining a major offensive boost. Some Royal Paladins such as Knight of Twin Sword enables multiple attacks. You may call many units to join Altmile in battle and pressure your opponent in a corner!

They are a dynamic duo with fierce offense! Their skills complement each other. Altmile’s skill to give power to rear-guards and Holy Dragon, Crystaluster Dragon’s skill to limit defense put a lot of pressure on your opponent! Your units can break through nearly any defense!

Messianic Lord Blaster is a great heart card for Holy Dragon, Crystaluster Dragon. You have triple drive in combination with the ability to superior call units to the field. You can superior call two Blasters, and activate Messianic Lord Blaster’s first skill to give power and five criticals to Holy Dragon, Crystaluster Dragon!

In addition, you gain the benefits of activating a Legion. Four triggers may return to the deck. Thus, you may add heal triggers, draw triggers, or critical triggers to your deck. Legion increases your odds of checking a trigger during your drive check.

Finally, we cannot overlook Seekers. The forgotten archetype of the Royal Paladins has a major upgrade with this G-Unit. Seeker, Thing Saver Dragon has amazing synergy Holy Dragon, Crystaluster Dragon. You may have two battles with your vanguard in a turn.