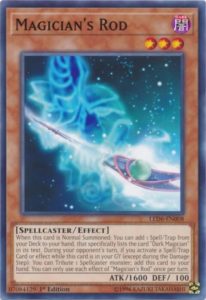 When this card is Normal Summoned: You can add 1 Spell/Trap from your Deck to your hand, that specifically lists the card “Dark Magician” in its text. During your opponent’s turn, if you activate a Spell/Trap Card or effect while this card is in your GY (except during the Damage Step): You can Tribute 1 Spellcaster monster; add this card to your hand. You can only use each effect of “Magician’s Rod” once per turn.

Furthermore, the consistency from Magician’s Rod is an important factor for the archetype. Normal monsters such as Dark Magician need extra support. You will have a useful spell or trap card for your advantage. The deck can consistency set a strong board.

You can add Magician’s Rod from the graveyard to your hand with its second effect. This method is a unique tactic to regain the card. You can summon it again for its first effect.

This ability is a situational effect. You may not want to tribute a spellcaster for Magician’s Rod. You would lose a monster on the field, and Magician’s Rod would be in your hand. An opponent could launch a direct attack if your field does not have any monsters.

Play these cards with Magician’s Rod!

Overall, Magician’s Rod is a great card for the Dark Magician. I recommend playing three copies of Magician’s Rod in a competitive deck. Its first effect is the card’s true value. Your deck has consistency, and you will have the best card in your hand for the current state of a duel.