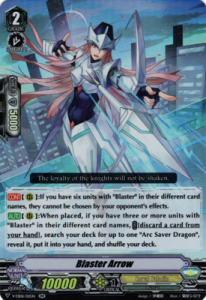 The loyalty of the knights will not be shaken.

Blaster Arrow is a member of the Royal Paladins and Blaster Blade’s unit of Blasters. She wields a might arrow with silver arrows. Her arrows can pierce through any enemy. In addition, Blaster Arrow is one of the first females Blasters in Royal Paladins. Her skills strongly support her archetype.

Aichi plays Blaster Arrow in his deck in Cardfight!! Vanguard V. This card is connected to Kourin Tatsunagi. She becomes Blaster Arrow during Aichi’s and Takuto’s final battle. All of Aichi’s teammates become his rear-guards in battle. Messianic Lord Blaster gains power from every rear-guard, and this includes Kourin as Blaster Arrow.

Blaster Arrow protects her fellow Blasters on the field. Her effect prevents the effects of your opponent’s cards from choosing or targeting your units. It is an effective ability to avoid effects from clans such as Kagero and Narukami. You can play a very aggressive strategy of calling many Blasters to the field without consequences. Your opponent cannot activate effects to target your units.

Blaster Arrow searches for Arch Saver Dragon if you have three or more Blasters on the field. This is a useful effect if you are playing Arch Saver Dragon. You have access to a new vanguard for your next turn. The skill also does not have a cost. You gain a free card without losing any resources!

Play these cards with Blaster Arrow in the standard format!

Blaster Arrow is a useful rear-guard for Blasters in the premium format. Her ability to protect your rear-guards from your opponent’s effects is a valuable skill. Many clans from Cardfight!! Vanguard G have cards with the ability to retire opposing units. Blaster Arrow maintains your field of Blasters. Only a few cards can bypass her effect.

Play these cards with Blaster Arrow in the premium format!

Overall, Blaster Arrow is a good card for Blaster decks, and I expect her maintain her value in the deck. Her value comes from her first skill. Baster Arrow’s skill to protect other Blasters is a very useful skill. Decks in the standard and premium format will take full advantage of the protection. Blaster Arrow’s second effect is not a great ability due to decks have better vanguards than Arch Saver Dragon.