I have been waiting for new support for King of Knights, Alfred, and Bushiroad has finally delivered the cards in G Comic Booster 1: Vanguard & Deletor. The king is finally back in action! His last support was a Legion from a promo release. King of Knights Vanguard, Ezzell was a first step in Alfred reclaiming his top spot in Royal Paladins. I have been playing the deck since Ezzell became available in English. I am only reviewing on how the new cards work with King of Knights, Alfred. I am excluding cards with Alfred in their names such as Alfred Early and Light Source Seeker, Alfred Exiv. 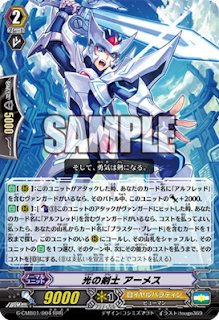 Swordsman of Light, Ahmes is the best card in the set for Alfred. He gains 2K attacker when Alfred is your vanguard. He pressures your opponent with his power and his second skill superior calls Blaster Blade from your deck! Blaster Blade’s skill also becomes free to retire one of your opponent’s rear-guards. Let’s not forget Blaster Blade will be standing and ready to attack. I will make room in my deck to add him. 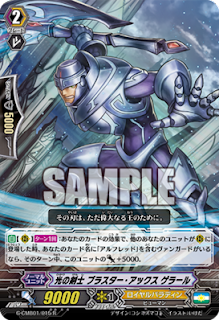 [AUTO](RC)[1/Turn]:When your other unit is placed on (RC) due to an effect from one of your cards, if you have a vanguard with “Alfred” in its card name, this unit gets [Power]+5000 until end of turn.

Royal Paladins are finally getting more cards with Blaster in their names. This big guy is a major powerhouse. He makes up for the lack of not having a 12K attacker. His skill is very constant with the new support. There are plenty of cards to superior calls units to trigger his skill. 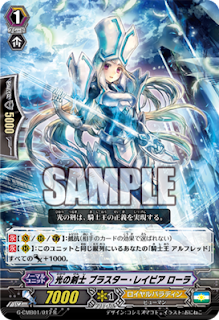 [CONT](VC/RC/GC):Resist (This unit cannot be chosen by the effects of your opponent’s cards)
[CONT](RC):All of your units named “King of Knights, Alfred” in the same column as this unit get [Power]+1000.

Swordsman of Light, Blaster Rapier Lola makes King of Knights, Alfred an 11K vanguard. Your opponent cannot touch her. Kagero’s, Narukami’s, and Link Joker’s skills cannot affect her. She is also great to have as a booster for your rear-guards when playing against Link Joker. 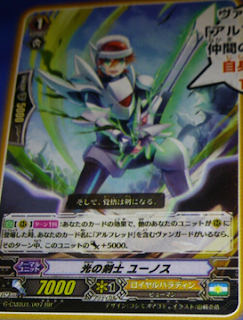 [AUTO](RC)[1/Turn]:When your other unit is placed on (RC) due to an effect from one of your cards, if you have a vanguard with “Alfred” in its card name, this unit gets [Power]+5000 until end of turn.

Swordsman of Light, Yunos looks like a younger version of Blaster Blade. I’m surprised he does not have Blaster in his name. Yunos becomes a 12K booster when a unit is placed on a rear-guard circle from a card’s effect. Place him behind Axe Guerard to create a 26K column or I can place him in the front row as an attacker. 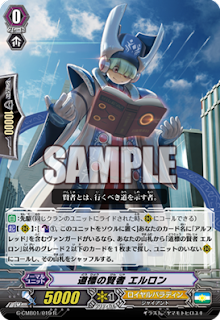 [AUTO]:Forerunner (When a unit of the same clan rides this unit, you may call this unit to (RC))
[ACT](RC):[Counter Blast (1) & Put this unit into your soul] If you have a vanguard with “Alfred” in its card name, search your deck for up to one grade 2 or less card not named “Signpost Sage, Eluron”, call it to an open (RC), and shuffle your deck

Alfred finally has a starting vanguard! Signpost Sage, Eluron superior calls a grade 2 or less rear-guard from your deck. I can use his skill to easily get Swordsman of Light, Blaster Rapier Lola on the field for Alfred to get his power boost. Of course Eluron’s skill triggers Yunos’s and Axe Guerard’s skills! 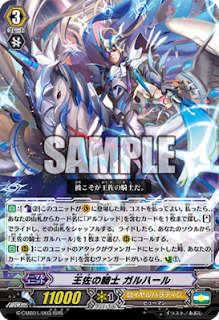 [AUTO]:[Counter Blast (2)] When this unit is placed on (VC), you may pay the cost. If you do, search your deck for up to one card with “Alfred” in its card name, ride it as [Stand], and shuffle your deck. If you rode, choose a card named “Knight of King’s Lieutenant, Galehalt” from your soul, and call it to (RC).
[AUTO](RC):When this unit’s attack hits a vanguard, if you have a vanguard with “Alfred” in its card name, Counter Charge (1).

Knight of King’s Lieutenant, Galehalt superiors calls Alfred from the deck and afterwards he superior calls himself from your soul. Galehalt is clearly made for a deck featuring King of Knights, Alfred as the main vanguard. His counter charge is useful to be able to use your rear-guards’ skills. You will be superior calling a lot with the new support. He does not fit in King of Knights, Alfred’s Legion deck.  There is no room to fit him into the deck. Alfred is the Legion Mate. You need either Alfred or Ezzell in your hand to activate their Legion skill.