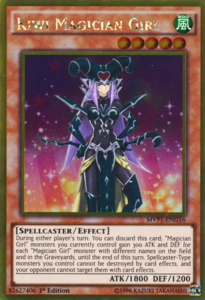 During either player’s turn: You can discard this card; “Magician Girl” monsters you currently control gain 300 ATK and DEF for each “Magician Girl” monster with different names on the field and in the Graveyards, until the end of this turn. Spellcaster-Type monsters you control cannot be destroyed by card effects, and your opponent cannot target them with card effects.

For example, your Magician Girls can gain 1,200 ATK and DEF if you have 4 different Magician Girls on the field and in your graveyard. A monster such as Dark Magician Girl would have 3,200 ATK. Then, she can defeat many monsters by battle.

However, your opponent can avoid this effect. He or she may destroy Kiwi Magician Girl by battle, and many monsters can easily crush her in battle. Then, your spellcasters will lose their protection.