Bushiroad has done a fantastic job at reviving classic decks through Legion with its Revival Grade 3 Campaign. Many old decks are in need of new support, and Legion is the perfect starting point for many decks. CEO Amaterasu and King of Knights Alfred have greatly improved by becoming mates for new Legion units. There are many units that I want to see improve by being upgraded with Legion. 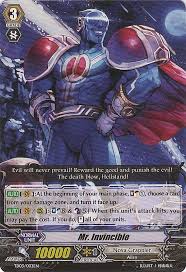 Everyone’s favorite laughing superhero deserves to gain new superpowers! Mr. Invincible is one of Kamui’s signature units in season one. His devastating Hellstand was too much for Aichi to handle at the shop tournament. He can take full advantage of Legion by building the Soul with multiple Legions and soul charging. His Mega Blast combined with back to back Legion attacks will crush the competition! 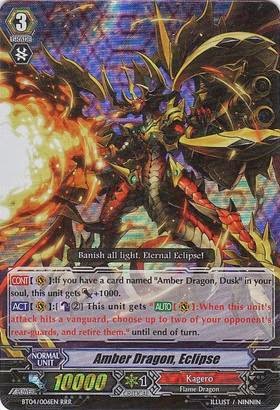 Amber Dragon, Eclipse is the black sheep in Kagero from season one’s cards. He was never popular among players because his skill requires his attack to hit to be able to retire opponent’s units, and his support was very mediocre. Competitive players elected to play Dragon Overlord the End which is a far stronger unit with superior support. Give him a consistent 12K attacker along with a Legion partner to make him playable against the best decks. Bushiroad has forgotten about Dragonic Kaiser Vermillion. The dragon was once considered one of the best cards in the game. He basically destroyed an opponent’s front rear guards in a single attack, and a wise opponent would never try to defend his or her rear guards when they are about to meet their fate. Vermillion badly needs to be resurrected with the power of Legion. Think about the damage it can do when his Limit Break is online combined with its Legion attack! 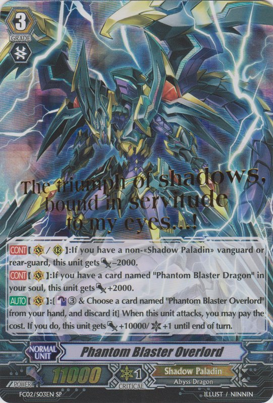 I cannot forget about the villains’ vanguards. Phantom Blaster Overlord has not see any play since Ren lost at the national championship. Legion is just what the doctor ordered for the Shadow Paladins’ corrupted leader. Its skills are very costly and need major relief to give the deck more abilities. A proper Legion for Phantom Blaster Overlord needs a cheaper skill to give flexibility to supporting units’ skills. Majesty Lord Blaster is the most obvious choice for the Revival Grade 3 Campaign. Blaster Blade’s true form is a masterpiece. The deck has not been relevant for two years; it is simply outclassed by faster and stronger decks. Blaster decks have not received much support since the deck was originally created as Blaster Blade Spirit was the last useful card made for the deck. The recent Blasters do not fit in the deck at all as they are restricted to other archetypes. Majesty Lord Blaster needs to become a mate for a new Legion and new support cards to give him the cutting edge. The true vanguard can return to its dominant form with the power of Legion!