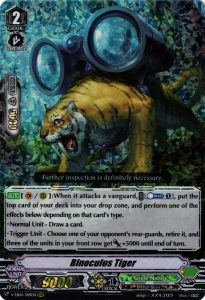 [AUTO](VC/RC):When it attacks a vanguard, COST [Counter Blast (1)], put the top card of your deck into your drop zone, and perform one of the effects below depending on that card’s type.
• Normal unit – Draw a card.
• Trigger unit – Choose one of your opponent’s rear-guards, retire it, and three of the units in your front row get [Power]+5000 until end of turn.

Binoculus Tiger is one of the most popular units in Great Nature from the original Cardfight!! Vanguard. Bushiroad brings him back for the standard format. Binoculus Tiger returns to Cardfight!! Vanguard with amazing new artwork, and a fantastic ability. The new artwork has a realistic style. I like the new skill because it complements Great Nature’s style and strategy.

Binoculus Tiger’s ability sends the top card of your deck to your drop zone. Then, one of two effects will activate. The activation of the effect depends on the type of card sent to the drop zone. Both effects are very beneficial to you. You may prefer one effect over the other at certain points during a game.

First, Binoculus Tiger’s ability allows you to draw a card when you send a Normal unit to the drop zone. His ability offers a good advantage for an Accel clan such as Great Nature. You are calling many units to the field. Binoculus Tiger adds cards to your hand to maintain a good defense. You can defend your vanguard against your opponnet’s next assault.

Second, Binoculus Tiger’s ability retires an opponent’s rear-guard and three of your units in the front row gain 5,000 power until end of turn. This effect is triggered by sending a Trigger unit to the drop zone. This effect weakens your opponent’s field by retiring his or her best rear-guard. In addition, you are adding 15,000 power (5,000 power to each unit) to your front row. Add power to your vanguard to increase the pressure on your opponent!

Play these cards with Binoculus Tiger!

I love the ability’s concept, and this makes Binoculus Tiger a great card. Bushiroad did a great job at designing this card. Both conditions give you an advantage over your opponent. It is not a win or lose situation. You are going to either draw a card or retire your opponent’s rear-guard and gain power.

Finally, Binoculus Tiger is a wonderful card to add in Great Nature decks for the premium format. He is a generic card that has synergy with many cards in this format. His second effect is very beneficial to the clan. Your gain control of the field and strengthen your formation. There are many powerful rear-guards in the premium format, and you need to retire the opposing rear-guards often.

Overall, Binoculus Tiger is one of the best rear-guards for Great Nature. Binoculus Tiger rules the animal kingdom with his fierce ability! His ability will either draw a new card, or increase your front’s power! His second effect has amazing potential to swing the game in your favor. The second effect pressure your opponent and weakens their formation.