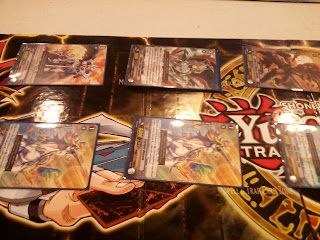 I’m on holiday break! It was time to visit my locals today. I wanted to test out my new cards Alfred Early and High Dog Breeder, Akane! Sadly there weren’t many cardfighters in the shop. Most players have gone home for the holidays! Hopefully things will pick up next year!

Today I played against a Granblue player. This was my very first time playing against a Granblue deck. I remember watching Gouki use the deck in the anime. I had in mind what to expect from my opponent. The first match was very close. Things got interesting on my opponent’s third turn. We were both at 3 damage. He swung at my Vanguard with his Grade 3 unit. I didn’t guard against his attack. His first trigger check was a critical trigger, and lucky for me his second wasn’t a trigger. My following turn won me the game. I did a basic support attack with Grancelot.  I won 6-5!

My Royal Paladins dominated the second game. My opponent didn’t draw a Grade 3 until his fifth and sixth turn. That’s a death sentence in Cardfight Vanguard! That gave me a huge hand advantage. I called my heavy hitters Galatin and Alfred Early to join my Vanguard Grancelot. I had too much attack power for my opponent to handle. All of my attacks were above 15,000 Power. I finished off my opponent using Grancelot’s counterblast! His counterblast gave him plus 2 critical and 5000 power.

I was disappointed that I didn’t get a chance to play Akane and use Alfred Early’s skill. It’s all good.

Here is my current Royal Paladin deck list! I’ve made a few changes since the last time!