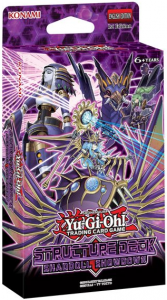 In addition, Shaddoll Showdown introduces new Shaddoll cards. One of the best archetypes in the game reaches a new level of power! The archetype was a group of only Dark monsters until now. They are receiving their first non-Dark Shaddoll monsters for your main deck. There is also a new El-Shaddoll Fusion Monster that is made with two different attributes! You have more options to play cards in your extra deck.

Finally, Shadoll is one of the strongest and most popular archetypes in the recent era of Yu-Gi-Oh! The archetype has been a powerful deck since Duelist Alliance in 2014. Their Fusion Monsters restrict and punish players for special summoning monsters. They also have power Flip Effects to search for cards and create an advantage on the field. Shaddoll is one of the best decks because of this unique style. The new cards from Shaddoll Showdown are going to make a major impact in the meta.