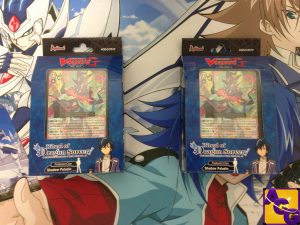 The majority of the cards in Ritual of Dragon Sorcery have the Ritual ability. The deck’s headliner Dragheart, Luard is a master of Ritual and striding G-Units. His ability pays for Stride instead of a player discarding cards with grades that equal grade three. In addition to paying for Stride, you save cards in your hand, and quickly build a large hand. Dragheart, Luard has quickly become one of my favorite Shadow Paladins from Cardfight!! Vanguard G.

Furthermore, Dark Dragon, Carnivore Dragon is an excellent generic card for Shadow Paladin decks. Its skill does not require Ritual, and you may play it in every deck. His skill requires two of your opponent’s rear-guards in exchange for retiring one of your rear-guards. In addition, you can play Dark Dragon, Carnivore Dragon in any Shadow Paladin deck. It is a great option for budget decks.