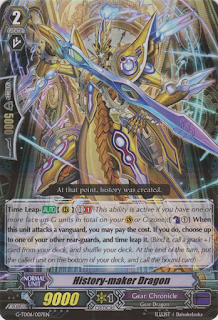 At that point, history was created.

Time Leap-[AUTO](RC) Generation Break 1 (Active if you have one or more face up G units in total on your (VC) or G zone):[Counter Blast (1)] When this unit attacks a vanguard, you may pay the cost. If you do, choose up to one of your other rear-guards, and time leap it. (Bind it, call a grade +1 card from your deck, and shuffle your deck. At the end of the turn, put the called unit on the bottom of your deck, and call the bound card)

History-maker Dragon is one of the first units to feature the keyword Time Leap. Time Leap binds a unit and superior calls one unit with a grade higher than the bound unit. Then, the new unit returns to the deck and the bound unit returns to the field at the end of our turn. He was first released in Trial Deck 6: Rallying Call of the Interspectral Dragon. He has since found a home in my Gear Chronicle deck.

History-maker Dragon’s Time Leap activates when he attacks a vanguard. Choose one of your other rear-guards and time leap it. You are able to gain an additional attack for the turn. I would first attack with my other grade 2 unit and Time Leap it with History-maker Dragon’s skill. Now I would have a grade 3 unit in the front row. My new unit would have enough power to hit the opposing vanguard.

Play these cards with History-maker Dragon!

Furthermore, Gear Chronicle has many units with the abilities that trigger when they called to the field and you can take advantage of these abilities during combat. Chrono Dran is a fine target for History-maker Dragon’s skill. You are able to create a few plays with Chrono Dran. His skill superior calls Chronojet Dragon or Chronojet Dragon G from the deck and places the card into your hand at the end of the turn.

Overall, History-maker Dragon is a nice complementary piece to Time-Leap decks. He is one of my favorite units in my Chronojet Dragon deck. You can use his skill early and often in the games. He enables never ending combos. You may use his abilities to gain resources or gain extra attacks during combat. The decision is based on how the game is stacked in your favor. Make a new history in time and space with History-maker Dragon!