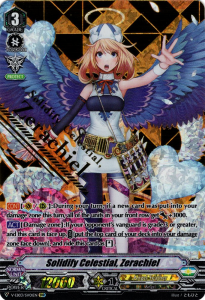 You shall now realize, the true power that lies within you……

Solidify Celestial, Zerachiel is the captain of the Celestial medical team. She hides her six wings during peaceful times, but reveals her mighty wings in combat. Her comrades fully trust her because she has strong leadership qualities and abilities. Her abilities grant amazing power to her rear-guards in combat. She also has the ability to superior ride from the damage zone.

Solidify Celestial, Zerachiel’s first skill gives 3,000 power to all units in the front row after a card is put into your damage zone during your turn. This skill provides offense for your front row. Using this skill once in a turn will raise Zerachiel’s power to 15,000. Then, she will be able to hit any vanguard without a boost. You can commit your boosters to your rear-guards in the front row.

Play these cards with Celestial Zerachiel!

Solidify Celestial, Zerachiel’s second skill superior rides her from the damage zone. This is an amazing ability to use the damage zone as your hand. You gain a new vanguard and a Protect marker when you superior ride her. In addition to gaining a new vanguard, Million Ray Pegasus’s skill triggers from the skill. Furthermore, this skill helps you if you are locked on grade 2 or locked by Dueling Dragon, ZANBAKU.

Overall, Solidify Celestial, Zerachiel is a good vanguard for Angel Feather. Zerachiel fully uses Angel Feather’s ability to manipulate the damage zone for her advantage. I want to superior ride her from the damage zone to the field. It is an amazing ability. Then, I can draw a Protect marker and catch my opponent by surprise.