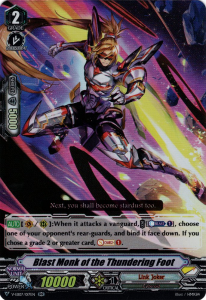 Next, you shall become stardust too.

[AUTO](VC/RC):When it attacks a vanguard, COST [Counter Blast (1)], choose one of your opponent’s rear-guards, and bind it face down. If you chose a grade 2 or greater, Soul Charge (1).

Furthermore, this effect effectively counter decks that rely on rear-guards. Decks with cards such as Blaster Blade and Blaster Dark are vulnerable to this card. You are removing necessary cards to your opponent’s strategy. Then, they are unable to properly function without those cards. For example, Monarch Sanctuary Alfred cannot send Blaster Blade from the drop zone to your hand if Blaster Blade is in the bind zone.

Play these cards with Blast Monk of the Thundering Foot!

In addition, Blast Monk of the Thundering Foot’s effect also soul charges a card to build your soul. This effect has synergy with a few units in Link Joker. It fuels effects that need to soul blast cards to pay for the cost. You consistently use those cards during the match. The demand for this card may increase if Link Joker gets more support that require soul blast.