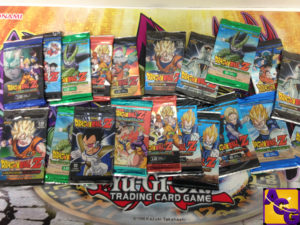 Panini America’s version of the game featured the Saiyan Saga, Frieza Saga, and Cell Saga. The first few movies were also featured in special booster sets. We have Main Personalities of Goku, Gohan, Future Trunks, and Piccolo for heroes. Some of villains are Captain Ginyu, Frieza, Cooler, and Broly. It is unfortunate the game will not cover the remaining sagas and extend the game into Dragon Ball GT and Dragon Ball Super. I am disappointed to not see Pikkon, Super Buu, and Dabura as Main Personalities.

The Best of DBZ TCG

Dragon Ball Z Trading Card Game ended on a high note with Vengeance and Awakening. Vengeance was the best expansion set in the game with many good personalities and named cards. Nearly ever Main Personality and Mastery from Wakening were well received by players. Mr. Satan was the only mediocre Main Personality in the entire set. I was blessed to get Future Trunks from my starter deck.

Other high notes are the variety of characters, promos, and Allies. Allies are Panini America’s best change from the original game. Allies were their own type of card. The original game allowed any level 1, 2, and 3 cards to be allies in decks. Panini America removed this abusive rule and created Allies as a type to avoid the original game’s error. Some Allies were made for particular Main Personalities. The Ginyu Force’s skills are at their full potential with Captain Ginyu!

Panini America’s staff made positive changes to the rules. These changes were made to prevent players from abusing cards and combos. Decks were required to be exactly 60 cards and only characters with their names on named cards can play those cards. Goku can only play named cards with his name in the title. Players could not abuse personalities’ powers by using the same powers twice per combat.

The Worst of DBZ TCG

Unfortunately, Panini America failed to learn from Score’s worst mistake. They continued the game’s tradition of having randomized starter decks. This is an extremely abusive product. Players did not know which deck was in the box. You may get lucky and get the deck that you want to play. However, you may be very unlucky and get the worst Main Personality from the particular set. You must continue to buy starter decks until you finally get the Man Personality that you want. Starter decks cost between $15 and $20. You may spend nearly $100 to find your favorite character.

Furthermore, this type of starter deck is not practiced by competitors. You know which structure deck from Yu-Gi-Oh! that you are buying at the store. There are not surprises in Magic the Gathering’s starter decks. Cardfight!! Vanguard’s only surprise will be a special rarity of a card. You are not forced to buy a starter deck multiple times to find a particular deck. It is a huge turn off and potentially limits players’ budgets.

The game’s formats were mostly dominated by Piccolo and Captain Ginyu for the majority of the game’s duration. Nobody expected the leader of The Ginyu Force to become a top character in the trading card game. Panini America struggled to develop good personalities. Vegeta’s first set as a Hero from Evolution was the worst Main Personality set. His abilities do not have chemistry with cards. He could not consistently function as your Main Personality. Panini America finally turned the corner with good Main Personalities in Vengeance and Awakening

Dragon Ball is a very popular property with high demand in my markets. The original Dragon Ball Z Collectible Card Game has many valuable cards. Panini America released a few notable promos that are worth a lot of money. Their value will only grow as time goes on. Golden Frieza, Super Saiyan God Goku, and Lord Beerus are the most valuable cards in the game. They are special promos from Panini America’s booths at Gen Con. Super Saiyan God Goku is the best card among the three. He is played in decks more often than Golden Frieza and Lord Beerus. Dragon Ball Z Trading Card Game has types of cards from the original Dragon Ball Z Collectible Card Game and has new types of cards for its version. Players may want to combine the two games into one great game. Panini America game did not extend into the later sagas such as the Other World Tournament Saga and Kid Buu Sagas. Players will need to combine the games’ cards to have characters from every DBZ saga. Main Personalities, Physical  Combat Cards, Energy Combat Cards, and Masteries can easily fit into retro’s version. There are very few conflicts with the original game’s layout.

However, there are also many conflicting cards such as Setups and Allies. All personality cards are can be played as Allies in retro DBZ CCG, but DBZ TCG’s Allies are their own type of personality. The two games may remain separate from each other. Setups do not exist as the same term in the original game. Non-Combat cards were either Drills or similar to Setups in Panini America’s game. These problems may prevent the two games being combined into one amazing game.

Dragon Ball Z Trading Card Game will go down as a trading card game that failed to live up to its potential. Veterans were excited after they heard the news about the game’s revival. Panini America learned from some of Score’s mistakes. However, there were not many good Main Personalities until the game’s final days and Panini America abused starter decks. I am sad to see the game in end when it was becoming a good game. I still recommend hardcore fans of Dragon Ball Z and the trading card game to purchase the game. It is cool to have the complete collection.