Broly is one of the most popular DragonBall characters to never appear in the manga and anime. He is famous for being the legendary Super Saiyan of legend. Vegeta fears him. Goku defends the innocent from him. Gohan, Goten, and Trunks battled him in an epic showdown. Broly has finally joined the battle in DragonBall Z Trading Card Game. This Saiyan warrior made a huge impact in Score’s DragonBall Z Collectible Card Game. Broly starts out very slow. His powers are still pretty good. He just is not nearly as strong as his higher levels. The first power decreases an opponent’s power stages after he or she advance a level. This is good for a deck with a lot of physical attacks. The second power is a physical attack. It banishes the top card of an opponent’s deck by revealing two cards. The upside is you can banish an important card from your opponent’s deck. However, there is a major setback. Your opponent can prepare for the cards that you revealed to activate the skill. Your opponent can prepare for your upcoming strategy. Broly’s second level is a modified version of his first level. His second power automatically banishes the top card of your opponent’s Life Deck and you can also reveal 2 attack cards from your hand to banish a Setup or Drill. However, the second power also has the same setback as the first skill. It also has greater rewards. You can banish up to two cards! After your opponent’s MP advances a level, all of your opponent’s personalities lose 7 stages. Physical attacks performed by this personality deal +3 stages of damage.
Power: Physical Attack.
You may reveal 2 attack cards from your hand to draw a card. Damage: 4 stages.

Level 3 is where Broly becomes an elite personality. He hits hard and hits often! The first power continues to punish your opponent for advancing levels. Their personalities become vulnerable to physical attacks. Allies and the Main Personality lose seven power stages after the opposing Main Personality advances a level. Allies become less useful in combat. Your opponent cannot use Endurance. Physical attacks performed by this personality deal +4 stages of damage and their damage is banished.
Power: Banish the top 2 cards of your opponent’s Life Deck. You may reveal 4 attack cards in your hand to banish any amount of Setups, Drills, and Allies.

Broly becomes almost unstoppable at level 4. You want his physical attacks to hit hard and hit often. Your opponent cannot use Endurance to prevent damage from any attack. Broly’s physical attacks deal +4 stages of damage. He has the highest power level at this time in the game. He can easily stack a lot of life card of damage if he can decrease an opponent’s power stage to zero. He clears the opponent’s board. This game has not been very friendly towards Allies outside of Captain Ginyu’s deck. Broly banishes all of your opponent’s Allies, Drills, and Setups to the next dimension! 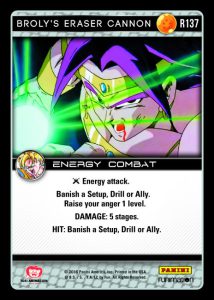 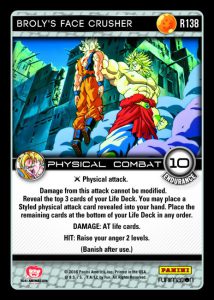 Broly’s named cards are great. They bring out the best in Broly’s character. Broly’s Eraser Cannon is an interesting energy attack. The attack deals damage to an opponent’s stages. It automatically banishes an Ally, Drill, or Setup in play. It can also banish another Ally, Drill, or Setup if it hits the opposing main personality.

I would play three copies of Broly’s Face Crusher. It has the perfect defense of 10 endurance. You will take little to no damage if it is revealed doing a damage check. It is also a good physical attack. It draws a style physical attack and the damage is AT life cards.

Broly wins by MPPV and Life Deck victory. Saiyan Rampaging Mastery quickly advances Broly to his stronger levels. His hard hitting physical attacks will break your opponent’s stages and force life cards of damage. Saiyan is the perfect style for Broly. There are great physical attacks that bring out Broly’s full potential. Saiyan Gut Kick is a great card to play with Broly. Your opponent’s next action in combat is skipped. Saiyan Elbow Drop remains on the field to be played twice in combat. You can continue the beatdown with an ongoing assault.

Broly starts slow, but he finishes strong as he advances to his higher levels. He is built for physical beatdown decks with a Saiyan mastery. Broly has a lot of potential with Saiyan Rampaging Mastery. He can quickly level up and perform physical attacks with the Mastery’s ability. You want to advance Broly as quickly as possible to use his strongest powers. I am expecting a lot of players to be playing Broly in the upcoming format. Check out Erik’s article on Broly at Some Card Game Blog!