Panini America continues Score’s tradition of upgrading the main protagonists’ power levels and introducing new villains in the next expansion that has a starter deck. Android 17 and Android 18 are the new villains for the starter decks. Vegeta is finally a hero as a Super Saiyan. I think Vegeta’s transition from a villain to hero is premature. He is clearly a rogue character in the series until after the Cell Games.

Each style has a new mastery. All styles have two Mastery cards to choose from. Players now have options to choose which Mastery is best for their Main Personality and deck. Saiyan received the major improvement that it so desperately needed from the first set. Saiyan decks can now with by MPPV! The best Mastery is the new Blue Tag Team Mastery. It works great with Goku and Captain Ginyu!

Starter Decks now contain a random structure deck instead of a randomized starter deck. Did Panini America read my article on how fix starter decks? This is just what I wanted except for the structure decks being random in each box. My Future Trunks deck only included Saiyan cards and free-style cards such as Confrontation. The deck is legal for tournament play without being required to change cards to legalize the deck. I do not have to buy new cards just to play. New players can grab a starter deck and starting learning the game’s basics. They will decide which character and style best fit their strategy.

Main Personalities and Mastery Cards are in booster packs 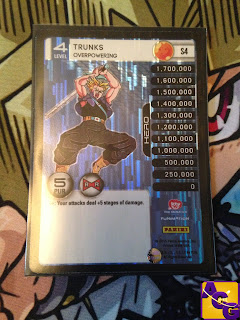 Finally, Main Personalities and Mastery cards from the starter decks can also be found in Dragon Ball Z Evolution booster packs. You are no longer required to buy starter decks to get the Main Personalities from the starter decks. This is great for experienced players who already have cards from the previous sets and buying a booster box is the best option. It can be great for collectors as well. I got a foiled level 4 Future Trunks from a random booster pack at Walmart and a foiled Red Ruthless Mastery in a pack from locals.