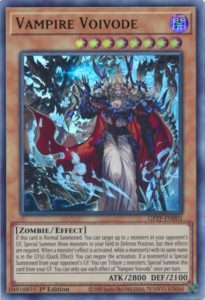 If this card is Normal Summoned: You can target up to 2 monsters in your opponent’s GY; Special Summon those monsters to your field in Defense Position, but their effects are negated. When a monster’s effect is activated, while a monster(s) with its same name is in the GY(s) (Quick Effect): You can negate the activation. If a monster(s) is Special Summoned from your opponent’s GY: You can Tribute 2 monsters; Special Summon this card from your GY. You can only use each effect of “Vampire Voivode” once per turn.

Vampires are deadly zombies in Yu-Gi-Oh!. They have unique effects for their theme. Vampire Voivode is a level 8 monster with unique effects like his comrades. He raises the dead with his unique effect. He can also special summon himself because Vampires are not easy to destroy.

Vampire Voivode has a unique form of control with a condition. The second effect negates the effects of an opponent’s monster if a monster with the same name is in either players’ graveyards. You can prevent the opponent from gaining an advantage. You shut down the the opponent’s strategy with the particular monster.

Furthermore, the first effect can set up the second effect. You may have an opponent’s former monster in your graveyard after you use it for a cost or tribute. Therefore, another copy of the opponent’s monster is neutralized for the duel. You can consistently negate its effects.

Play these cards with Vampire Voivode