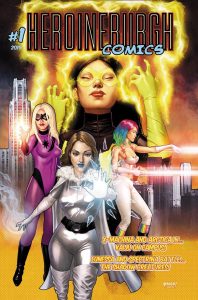 Heroineburgh is a superheroine series created by Shevek in 2017. This series features original superheroines and super villains in Southwest PA. Heroineburgh was originally a video series, and it has expanded to comics! In addition, has a YouTube channel that features behind the scenes and previews from episodes. Click this link to check out the official YouTube channel, and subscribe for updates!

This article is not a paid review for the comic. All opinions in this article are my true thoughts about this comic. 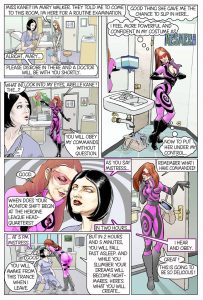 Our stories takes us to a Southwest PA metropolis with superheroines and super villains. A stereotypical meteor gives superpowers to some of the women from Pittsburgh. The source of the superpowers are is not original, but the characters are interesting with a variety of powers. The story introduces seven superheroines from the Pittsburgh Heroine League.

Furthermore, the first issue includes two stories with related conflicts. First, the Mesmera compromises the league and discovers Arcana’s real identity! Then, she hypnotizes Arcana to create powerful demons from her dreams. The second story stars Serpenta unleashes a huge reptile in the city. Only the heroines from the Pittsburgh Heroine League can stop these monsters from causing destruction.

I like the villains’ indirect approach to humiliate and defeat the league’s members. They avoid fighting multiple heroines at the same, and quietly watch the conflicts from afar. It is a smart strategy from the Black Faction. The only direct contact occurs when Mesmera hypnotizes Arcana to create shadow demons to attack students on campus. Also, the villains are hiding their tracks to avoid any confrontation.

Finally, the first volume closes with the Black Faction’s leader Vaporia. Her character has an a cloud of mystery to her. She has the police secretly working with the Black Faction. I am very interested in the lore and the unjustly alliance with these two organizations. The comic ends with me wanting to learn more about this corruption.

Each character has a unique costume to distinguish him or her from the large cast. There are many characters to follow, and the variety of costumes helps me recognize each character. You do not have multiple versions of Superman and Wonder Woman fighting crime on the same page. My favorite designs are Artica and Lunessa.

Two artist designed the art for the comic. Benjamin Zeus Barnett did a wonderful job on the interior art. In addition, Jason Wright designed the cover art and the character art for the issue. He is known for working on popular comics of superheroes. The cover is amazing art with four of the heroines displaying their superpowers. These heroines are all business and no playing games. I like his work in this book. Most importantly, the art is very consistent on each page.

I am very impressed by Heroineburgh Comics #1. Shevek is doing a fantastic job with this series and I wish him major success. It gives us a brief introduction to this unique universe. The ending leaves me interested in the Black Faction’s vile plot with the police department. I recommend comic book readers to purchase a copy of this book. This comic is a great debut, and sets the stage for more amazing stories.

You can purchase Heroineburgh Comics #1 at this link!