A new era has begun in Yu-Gi-Oh! Konami has officially released Speed Duels to the English edition. Speed Duel Starter Deck: Destiny Masters is one of the first starter decks for Speed Duels. It includes three Speed Duel decks of Yu-Gi-Oh!’s most popular characters. The decks are Yami Yugi (Atem), Maximillion Pegasus, and Ishizu Ishtar. 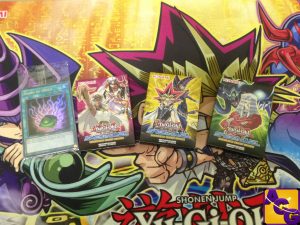 Yami Yugi’s strategy is playing Dark Magician and his support. You want to play Dark Magician early and often in duels. His Spell cards destroy your opponent’s cards. These cards are very important cards in your deck. They help you destroy stronger monsters than the Dark Magician.

Unfortunately, Yami Yugi’s deck feels incomplete. Many cards such as Feral Imp and Rogue Doll do not have synergy with Dark Magician. Feral Imp is one of Yugi’s cards from the original season, but it does not improve the deck. I would have liked to have two copies of Double Coston instead of Feral Imp. Starter decks in a new format need a solid foundation. Two Double Costons would have been good cards for the deck.

Pegasus’s deck features his Toon Monsters! It is the wacky world of cartoons and dirty tricks with the Millennium Eye. Your best Toon monsters such as Toon Summon Skull directly attack your opponent. You can dominate your opponent with two or three Toon monsters on your field. If your opponent is unable to stop your cartoons, then that’s all folks!

However, Pegasus’s starter deck has a major flaw. The deck’s best monsters rely on Toon World. If your opponent destroys Toon World, then your strategy crumbles. You can only special summon Toon Summon Skull and Toon Mermaid when Toon World is on the field. They will also be destroyed when Toon World leaves the field.

Ishizu Ishtar has the most consistent deck out of the three decks. Ishizu Ishtar ‘s starter deck is a complete deck unlike Yami Yugi’s deck and Pegasus’s deck. Her Gravekeepers have a lot of synergy and the Spell and Trap cards in the deck. Your cards consistently interact. Then, their synergy will give you an advantage over the inconsistent decks.

Furthermore, Ishizu’s deck’s design counters many decks. Hidden Temples of Necrovalley only allows players to special summon Gravekeeper monsters. Your opponent with a different deck such as Pegasus’s Toon deck will be out of business. Gravekeeper’s Priestess and Gravekeeper’s Shaman on the field prevent your opponent from playing a Field Spell card.