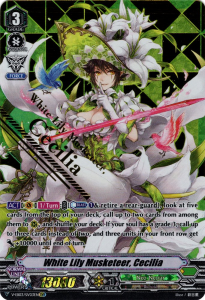 It’s a new friend. We must welcome them.

[ACT](VC)1/Turn:COST [Counter Blast (1) & retire a rear-guard], look at five cards from the top of your deck, call up to two cards from among them to (RC), and shuffle your deck. If your soul has a grade 3, call up to three cards instead of two, and three units in your front row get [Power]+10000 until end of turn.

White Lily Musketeer, Cecilia is the Musketeer’s captain. She wields a pink sword. Her original card had Limit Break, and her new version’s imaginary gift is Force! I like her new artwork better than the original. Her personality shines more in this artwork.

White Lily Musketeer, Cecilia’s skill looks at the top five cards from your deck, and superior calls two cards from among them. You may call three cards if your soul has a grade 3 card. This skill is fantastic for building your field. In addition to gaining strength in numbers, your new rear-guards use their abilities when they are placed on the field.

Then, White Lily Musketeer, Cecilia’s skill gives 10,000 to your units in your front row if your soul has a grade 3! This skill is a strong finisher in the deck. Cecilia’s power rises to 33,000 power with a Force marker and her skill. Her power adds a lot of pressure on your opponent. He or she will need to guard with at least two cards (one card being a heal trigger) to successfully block her attack.