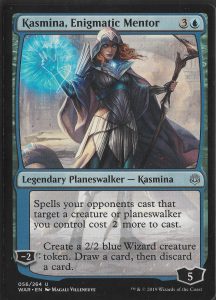 Spells your opponents cast that target a creature or planeswalker you control cost 2 more to cast.
−2: Create a 2/2 blue Wizard creature token. Draw a card, then discard a card.

Kasmina, Enigmatic Mentor’s effect increases the cost of the opponent’s spells that target your creatures or planeswalkers by two mana. You have some protection from your opponent, but the opponent may pay the heavy cost to target your cards. It limits your opponent’s ability to use spells against your creatures and planeswalkers. In addition to the heavy cost, the opponent needs to consider using mana to cast other cards. He or she must pay a hefty price to target a creature or planeswalker you control.

Kasmina, Enigmatic Mentor brings her friend to join her in battle! Her first ability creates a 2/2 Wizard creature token, draws a card, and discards a card. She is setting up your field and hand. You gain a new create and discard a card for a more useful card. You are cycling through your deck to quickly get your best cards.

Furthermore, this ability is very useful in a deck with Jace, Wielder of Mysteries. You want to draw cards often to meet his win condition. This ability can win the game with Jace on the field and your deck is empty. The Wizard token can also protect Jace during battle. I would only use them as blockers to stall for time.

Unfortunately, this ability costs two loyalty, and she does not have an ability to gain loyalty. You are only able to use it twice during a game. Use her first ability wisely. Furthermore, she will be very vulnerable to your opponent during battle. Your opponent will most likely attack Kasmina during his or her next turn.

Overall, I like Kasmina, Enigmatic Mentor’s design for an uncommon planeswalker. She provides good support for Jace, Wielder of Mysteries. You can also play her in decks with blue wizards. She would be a better card if she had an ability to gain loyalty. I recommend playing one or two copies of her. It would depend on your deck’s strategy.