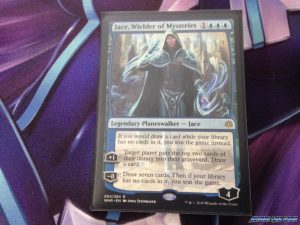 I purchased five booster packs of War of the Spark in hopes of pulling powerful Planeswalkers. I was blessed to pull Jace, Wileder of Mysteries among my booster packs. Jace is the ultimate strategist. This legendary Planeswalker uses his high intellect to defeat his enemies. His brilliance has led to a discovery of a new win condition. Jace is now the Wielder of Mysteries.

Jace’s first ability mills two cards and draws a card. This ability helps you reach the win condition. You are removing three cards from your deck with a single ability. You always want to mile and draw as many cards as possible every turn.  This ability needs to be used every turn until you are ready to use the next ability.

Furthermore, Jace’s second ability further accelerates your victory. You win the game if your library has no cards in it after you draw seven cards. This ability is great when your deck has very few cards remaining in it. You are refilling your hand if you are low on cards in your hand. The ability can save you if you need resources.

Play these cards with Jace, Wielder of Mysteries!

Furthermore, there are a lot of cards that support this win condition. Blue has many cards with the ability to draw cards such as Divination. Also, there are cards such as Augur of Bolas with the ability to mill and draw cards. I prefer these cards because they hasten the process of emptying my deck. If I can draw a card, and mill two or more cards, then that is fantastic. I am getting closer to victory.

Overall, Jace, Wielder of Mysteries is a good Planeswalker from War of the Spark. His win condition gives you an optional method to win games. You may either build a deck solely built for this ability or use it as a second option to win games. I want to build a deck just for his win condition. Jace has a lot of potential and future support will make him a stronger card.