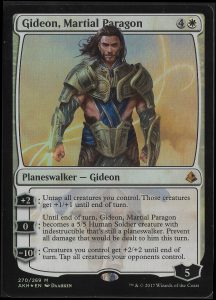 Gideon, Martial Paragon’s first ability untaps all of your creatures and they get +1/+1 until end of turn. This ability is fully effective with creatures who tap themselves for abilities. They are able to join combat after using their skills to strengthen your field. It also increases their power and toughness. Your creatures become slightly more durable in combat.

The second ability is Gideon Martial Paragon’s best feature. He becomes an indestructible 5/5 Human Soldier and he is still a planeswalker. He also does not take any damage from combat. Gideon, Martial Paragon is basically another creature on the field to join your warriors in battle!

I enjoy playing Gideon Martial Paragon because this ability is very fun and allows me  to be aggressive on offense. I like the concept of a planeswalker with the ability to attack. He is one of the few main cards and characters to have an emotional attachment to as a boss. Gideon leads the troops into war, and he cannot be defeated by any mere creature. I get a feeling of satisfaction of having my main card deal damage.

Gideon, Martial Paragon’s third ability adds 2/2 to your creatures and taps your opponent’s creatures. This ability is best used for pushing to win the game. A field with many creatures can drain your opponent’s life to zero. Strong creatures are attacking your defenseless opponent. He or she is unable to block your incoming onslaught.

However, this ability is very slow with a cost for 10 loyalty. It is very unlikely that you will use this skill. You need to use Gideon’s first ability often to gain loyalty to pay the cost. Furthermore, a wise opponent will attack Gideon to prevent the activation of the ability. Then, your planeswalker is taking damage or you are losing creatures by blocking opposing creatures.

Overall, Gideon, Martial Paragon is a decent card from a Planeswalker deck. I enjoy playing this card for his second ability. His second ability shines above his other abilities. Gideon brawls with your opponents and their creatures! Gideon is a planeswalker and creature in a single package.