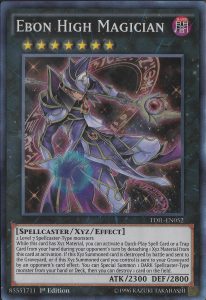 2 Level 7 Spellcaster-Type monsters
While this card has Xyz Material, you can activate a Quick-Play Spell Card or a Trap Card from your hand during your opponent’s turn by detaching 1 Xyz Material from this card at activation. If this Xyz Summoned card is destroyed by battle and sent to the Graveyard, or if this Xyz Summoned card you control is sent to your Graveyard by an opponent’s card effect: You can Special Summon 1 DARK Spellcaster-Type monster from your hand or Deck, then you can destroy 1 card on the field.

The Master of Quick-Play Spells and Traps!

Ebon High Magician’s second effect special summons a Dark Spellcaster from your hand or deck, and destroys one card on the field when he is destroyed by battle or an opponent’s card effect. You special summon a very powerful monster from your hand or deck to replace him. Thus, you are able to maintain a strong field. Furthermore, you gain an advantage by destroying one card on the field. This effect is perfect for destroying your opponent’s signature monster.

I like the effect’s concept of gaining a new monster after losing Ebon High Magician. It fits his defensive scheme by special summoning a new monster on your field. You have the opportunity to special summon a stronger monster on the field. One of my favorite targets for this skill is Dark Magician of Chaos. Dark Magician of Chaos’s effect triggers when he is summoned, and you draw any spell card from your graveyard.