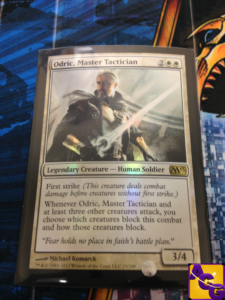 A true master tactician knows the art of First Strike. Odric, Master Tactician uses this strong ability to his advantage in combat. He is able to strike an opponent’s creature first to avoid damage from creatures without First Strike. He can force your opponent to block his attack with a strong creature. Ordic’s First Strike will destroy the creature before it can deal damage to Odric.

Furthermore, this skill is amazing in decks with tokens. If you have a lot of creatures on the field, you can deal a lot of damage to your opponent. Elspeth, Sun’s Champion is the perfect Planeswalker to play alongside Odric. She creates three 1/1 white solider tokens and can destroy monsters with power 4 or greater. She builds an army of white solider tokens for Odric to lead into combat!

Overall, Odric, Master Tactician is one of my favorite cards in my white mono deck. He has mastered his tactics in combat. His second skill is his highlight. He dictates blocking in combat during your turn. If played correctly, Odric can deal a lot of damage to your opponent. Odric will lead your troops to victory!