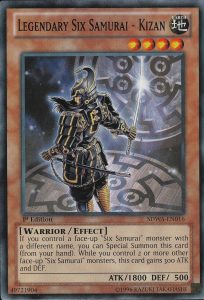 Legendary Six Samurai – Kizan’s second effect increases his ATK and DEF by 300 points when you control two other Six Samurais. This effect enables an aggressive strategy as you swarm the field with Six Samurais. He becomes a good beater with 2,100 ATK. Kizan can easily destroy many low level monsters in battle. In addition, a direct attack from Kizan depletes slightly more than a quarter of your opponent’s life points.

However, both effects depend on you controlling other Six Samurai monsters. The first effect is also very important to Six Samurai’s strategy to swarm the field. Your opponent can counter this strategy by preventing your summons. Then, Legendary Six Samurai – Kizan becomes a bland card without any effects. He loses a lot of value for your strategy when you cannot use the first effect.