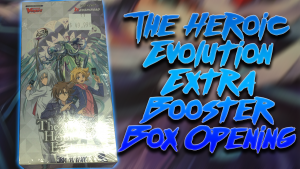 The Heroic Evolution is an extra booster set for Cardfight!! Vanguard by Bushiroad. This extra booster set features Kagero, Link Joker, and Nova Grappler. Many classic cards from the original series return in Cardfight!! Vanguard V. Each clan receives new cards for the standard format. In addition, all cards in The Heroic Evolution are legal for the premium format.

The Best Kagero Cards from The Heroic Evolution

Kagero receives cards to support two decks in the game. The End is never ending in vanguard. The legendary Dragonic Overlord The End finally debuts in the standard format. Bushiroad has provided an additional version of Dragonic Overlord for your decks. Furthermore, I think this card and its support have a lot of potential in the meta.

The Best Link Joker Cards from The Heroic Evolution

Link Joker receives new cards for the second consecutive set. Link Joker has many amazing cards in this set. In addition to the new Link Jokers, Bushiroad is now introducing Harmonics Messiah and its support for the standard format. Messiah is a popular card from Cardfight!! Vanguard G. The deck retains its original strategy of locking your units and unlocking them to gain effects.

Furthermore, the new support for Messiah is also fantastic for the premium format. New versions of Blast Monk of the Thundering Foot and Lady Battler of the Gravity Well replace their original counterparts. They are faster cards than the original cards because they are not restricted to Generation Break. Replace your older cards with the new versions. I pulled Lady Battler of the Gravity Well from my booster box and she is jumping in my Messiah deck.

Bushiroad is making Hero a full archetype for Nova Grappler in The Heroic Evolution. This is a unique case of a race on Cray being an archetype as most archetypes are not based on race. The deck has a powerful boss in Spinning Valiant, and the new cards for his support bring the deck together. It is a good alternative deck for the clan. I think Heroes are a better budget deck than Raizers at the moment.

Beast Deity receives the final pieces of their support to become a complete deck. The archetype receives its second grade 3 Ultra Beast Deity, Illuminal Dragon. It has amazing chemistry with the cards from Light of Salvation, Logic of Destruction. The deck is finally consistent with the proper vanguards for the deck. I think Beast Deity is currently the best archetype in Nova Grapplers.

Finally, one of my favorite Nova Grapplers in this booster set is Kick Kick Typhoon. He is a great addition to Nova Grappler. His ability to stand a rear-guard during battle is an amazing effect. Furthermore, you can use your vanguard’s skills to stand other units. You are generating a high-powered offense to dominate the competition.

Overall, The Heroic Evolution is an excellent booster box for Kagero, Link Joker, and Nova Grappler. All clans receive good support for excising decks and new decks. Furthermore, this booster set establishes new decks to diversify the environment of decks. All three clans in this set have multiple decks in the standard format. I am looking forward to playing against all of these decks.