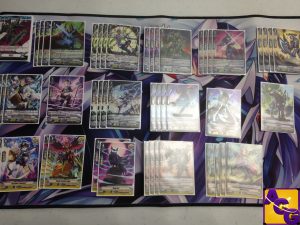 Shadow Paladins is one of the most popular clans in Cardfight!! Vanguard. The clan has many iconic cards in the franchise such as Blaster Dark and Phantom Blaster Dragon. They have established themselves as a good clan in the standard format. I enjoy their style of retiring allies and opponents’ rear-guards to gain powerful effects. It perfectly fits their theme as dark knights. This strategy is also very effective against most clans.

My standard for a budget deck is a budget of fifty dollars. The majority of cards from are valued at four dollars or less. I stared building this deck with cards from V Trial Deck 04: Ren Suzugamori and a booster box of V Booster Set 02: Strongest! Team AL4. Then, I purchased a few cards online to complete it. All in all, this deck costed me $44 dollars so I stayed within the budget for a budget deck.

The Dark Dictator also has synergy with my deck’s best cards. I can play combos with Blaster Dark, Blaster Javelin, and Black Stage, Charon. My favorite combo is superior calling Blaster Dark to retire two of my opponent’s rear-guards. It is a very devastating play against most decks. I always feel good forcing the opposition into retirement.

Dark Mage, Badhabh Caar provides a slight boost to my offense by calling a rear-guard to the field for a turn. While Dark Mage, Badhabh Caar gives my field a temporary boost, he does not have the same level of pressure as The Dark Dictator.  He is not the best backup vanguard, but he is the only option for Shadow Paladin until V Booster Set 04: Vilest! Deletor. He has a Force Marker, and that is always a positive.

Blasters are the Shadow Paladins’ special forces! They work well in this deck, and they provide a lot of offense to the deck. Blaster Dagger, Blaster Dark, and the lovely Blaster Rapier retire my opponent’s rear-guards. Then, Blaster Javelin gives me a free card when he is called to the field. Unfortunately, Blaster Axe does not provide much to the deck. I will be replacing him after we get new support next year.

The remaining cards are grade one units and triggers. First, I am going to focus on my grade one units. They provide power to themselves, the Blasters, or my vanguard. First, you may notice I am playing one Black Sage, Charon. It is not a budget card, but I am playing one copy because I pulled it from a booster box. I will play a full set if I ever pulled three more copies of him.

Witch of Nostrum, Arianrhod is a decent rear-guard for increasing my unit’s power. She increases my unit’s power by 10,000. This skill increases Blaster Rapier’s power to 24,000. Furthermore, Witch of Nostrum, Arianrhod is perfect to call behind The Dark Dictator as he does not need her boost. He gains 20,000 power from a Force marker and her first skill.  When she is behind him,

Nightmare Painter is a good card for soul charging in Shadow Paladins. He sends cards from the drop zone instead of the deck to the soul. I prefer cards with similar skills for soul charging as I do not worry about losing triggers or perfect guards from my deck.  I would play more copies of him, but I only pulled one from a booster box.

Overall, I am  happy with the deck. I tested it against many decks at my local shop, and won every game. The deck is consistent with a good flow of offense and quick combos. I plan to update this deck when V Booster Set 04: Vilest! Deletor is released in English. I want to replace Dark Mage, Badhabh Caar with a better vanguard. His skill is decent, but it does dominate games.