Locals were a bit interesting yesterday because a new Vanguard player named Brandon came to the shop. The guy was here on spring break from Ohio State. This was my very first experience playing against a Neo Nectar deck. I had no idea what to expect from this clan. So in the first  match I used the Royal Paladins. I lost the match 2 games to 1. I had control in early in the first match. It wasn’t until the second match that I realized how the Neo Nectar clan works. The Neo Nectar clan focuses on superior calling more units from the deck and outnumbering the opponent. 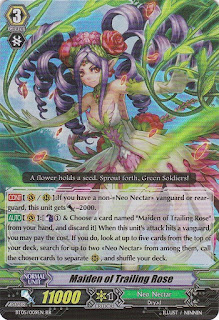 Maiden of Trailing Rose was a real thorn in my side. At first I did not realize that her persona blast only activates when she makes a successful attack hit. Her persona blast added an extra attacking unit along with a back-row boosting unit. I was unable to guard against all of the attacks. That spelled doomed for my Royal Paladins. Not to mention her power is 11000. 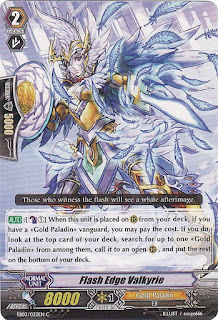 Later, Me and the guys took a break from playing and started trading cards. Unfortunately I didn’t have anything that the players wanted to trade for.I wasn’t out of luck. Me and the card shop owner traded some cards. I traded my Goddess of the Half Moon, Tsukuyomi and Stealth Beast, Leaves Mirage for the owner’s Battle Sister Souffle, Cannon Ball, Flash Edge Valkyrie, Listener of Truth Dindrane, Silver Fang Witch, and Ring Girl Clara.   Listener of Truth Dindrane and Silver Fang Witch can boost my Gold Paladin deck’s drawing ability   Now I finally have four heal triggers for my developing Nova Grappler deck!