Many players envision dealing the sixth damage to his or her opponent, and winning a fun game of Cardfight!! Vanguard. This victory is the typical way to win a game of vanguard. The strategy for most decks is to unleash a powerful offense and deal six points of damage.

I am listing cards with alternate win conditions in Cardfight!! Vanguard. This list does not include units such as Dragon Deity of Destruction, Gyze. I am only listing units with the abilities that state, “you win the game”.

Link Joker is the first clan to have a card with a win condition. Link Joker also has the most cards with special conditions to grant victory to the player. This strategy fits the clan’s identity of interfering with the game’s normal state such as locking cards and deleting vanguards. 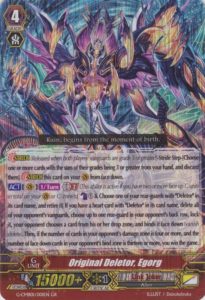 Original Deletor, Egorg has one of the most difficult win conditions to achieve. His skill requires your opponent to have four cards in his or her damage zone and thirteen face down cards in the bind zone to win the game. It is a very difficult condition to meet. A deck’s strategy needs to only focus on binding the opponent’s cards. It will be a long and grinding match for the best players to achieve this victory. 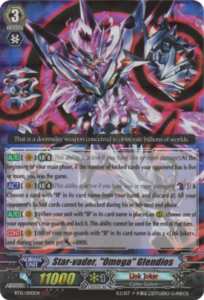 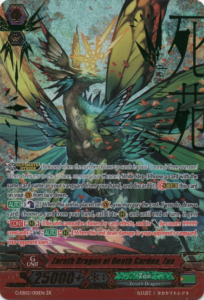 Zeroth Dragon of Death Garden, Zoa is a unique case. Its ability depends on another rear-guard in battle. Its ability increases a rear-guard’s power to 99,999, and the player automatically wins the game if the rear-guard deals damage to an opponent’s vanguard. An opponent’s odds of surviving this turn without a perfect guard are very slim.

However, this alternate win condition is the easiest ability to prevent. A player can play a perfect guard to block the powerful rear-guard. An opponent would lose his or her G-Zone if he or she cannot deal six damage, and will be at a major disadvantage. 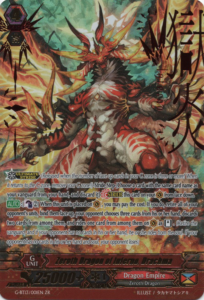 Overall, alternate win conditions in Cardfight!! Vanguard offer unique strategies and styles. Players play a very technical strategy to win a game instead of using offense to deal damage. Alternate win conditions are only in the premium format at this time. Bushiroad has not introduced this type of ability to the standard format.