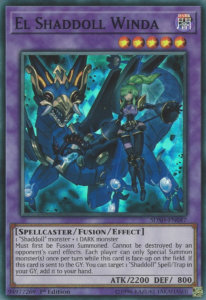 1 “Shaddoll” monster + 1 DARK monster
Must first be Fusion Summoned. Cannot be destroyed by an opponent’s card effects. Each player can only Special Summon monster(s) once per turn while this card is face-up on the field. If this card is sent to the GY: You can target 1 “Shaddoll” Spell/Trap in your GY; add it to your hand.

El Shaddoll Winda is a Fusion Monster and a member of the Shaddolls. She rides a huge dragon and wields a magical wand. El Shaddoll Winda’s magic can turn the tide in any duel! She has two powerful effects to support her archetype’s strategy. El Shaddoll Winda ensures the opposition will not dominate the game with a wave of special summons. She sets the rules to lead her fellow Shaddolls to victory.

El Shaddoll Winda is not an easy monster to destroy. She cannot be destroyed by your opponent’s card effects. Her first effect complements her second effect. El Shaddoll Winda needs this protection to control the flow of the game. She restricts players to one special summon per turn, and this is a huge advantage against many opponents.

The greatness of El Shaddoll Winda shines from her second effect. She limits the number of special summons to one special summon for each player per turn. This effect slows the game for many decks. It prevents players from swarming the field with many monsters.

However, this effect does not slow decks with Fusion Monsters. A player can activate Polymerization to fuse monsters from his or her hand. Many Fusion Monsters do not need material on the field to special summon them unlike Link Monsters, Sychoro Monsters, and XYZ Monsters. An opponent’s new Fusion Monster can destroy El Shaddoll Winda by battle.

Finally, El Shaddoll Winda requires one Shaddoll monster and one Dark monster to Fusion summon her. They requirements are easy to fulfill. Shaddoll has many Dark monsters to use as material.