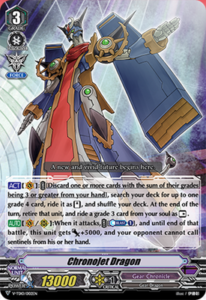 [ACT](VC):COST [Discard one or more cards with the sum of their grades being 3 or greater from your hand], search your deck for up to one grade 4 card, ride it as [Stand], and shuffle your deck. At the end of the turn, retire that unit, and ride a grade 3 card from your soul as [Rest].
[AUTO](VC/RC):When it attacks, COST [Counter Blast (1)], and until end of that battle, this unit gets [Power]+5000, and your opponent cannot call sentinels from his or her hand.

Players have been waiting for the return of Chronojet Dragon. Gear Chronicle’s signature card finally returns to Cardfight!! Vanguard. Chronojet Dragon has two new skills that are similar to his original style. Chronojet Dragon is ready to shape your future. Get your decks ready and turn the gears of time!

Chronojet Dragon’s first skill is similar to stride from Cardfight!! Vanguard G. You discard cards with grades equal to three and superior ride a grade 4 unit from the deck. This is a great skill to superior ride a powerful vanguard. Some of Gear Chronicle’s best units are grade 4 cards.

Furthermore, you ride Chronojet Dragon at the end of the turn. You gain an Imaginary Gift: Force. There is not a need to ride another copy of Chronojet Dragon. Simply discard any copy that you draw to pay the cost of the first skill.

Play these cards with Chronojet Dragon in the standard format!

There are endless possibilities for Chronojet Dragon in the premium format! He has a lot of support from many cards. First, Chronojet Dragon’s second skill has amazing synergy with Chronodragon Nextage (G-Unit). This skill is a stronger ability than the original card’s skill. You restrict the opponent’s options for defense, and Chronojet Dragon gains power!

Play these cards with Chronojet Dragon in the premium format!