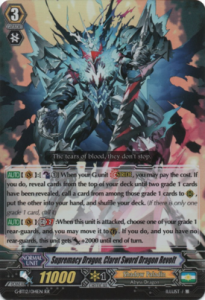 The tears of blood, they don’t stop.

[AUTO](VC):[Counter Blast (1)] When your G unit Stride, you may pay the cost. If you do, reveal cards from the top of your deck until two grade 1 cards have been revealed, call a card from among those grade 1 cards to (RC), put the other into your hand, and shuffle your deck. (If there is only one grade 1 card, call it)
[AUTO](VC) Generation Break 2:When this unit is attacked, choose one of your grade 1 rear-guards, and you may move it to (GC). If you do, and you have no rear-guards, this unit gets [Power]+2000 until end of turn.

Supremacy Dragon, Claret Sword Dragon Revolt makes a brief appearance in Cardfight!! Vanguard G: NEXT. He attempts to diffride Yuichirou Kanzaki,, but Kanzakik with his willpower resists the diffride. This is the only diffride to be rejected. Gastille does not have any further use for Claret Sword Dragon. The apostles move forward with their plans.

Furthermore, Gastille intended Claret Sword Dragon to become an apostle for Gyze. The plan was for him to have Zeroth Dragon of Zenith Peak, Ultima. Due to Kanzaki resisting the diffride, Chaos Breaker develops a new plan. This leads to Kazuma being chosen as a vessel for Gyze. Kazuma plays Shadow Paladins and he can Ultimate Stride Zeroth Dragon of Zenith Peak, Ultima.

I like Supremacy Dragon, Claret Sword Dragon Revolt’s skill because it is a good defensive ability. The skill allows you to place a grade one rear-guard to guardian circle when your opponent attacks Claret Sword Dragon Revolt. You save the cards in your hand. Furthermore, the recent grade one units have a 10,000 shield. You can block any of your opponent’s rear-guard with less than 20,000 power.