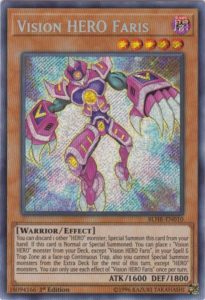 Vision HERO Faris special summons himself from your hand to the field. You only need to discard one HERO monster for the cost of this effect. It is a great tactic for Heroes. The effect special summons a monster and puts a key card in the graveyard for future use.

Furthermore, Vision HERO Faris provides many options. You may use this monster for a Link Summon or Fusion Summon with him as material. This card needs to be on the field for the summons of particular monsters such as Xtra Heroes and Masked Heroes.

In addition, this effect has strong synergy with Miracle Fusion. You are not losing resources in this case. Miracle Fusion may use your Hero in the graveyard as fusion material and fusion summon an Elemental HERO from your extra deck. The monster that you discarded still has value. You special summoned Vision HERO Faris and fusion summon an Elemental HERO with the same HERO that you just discarded for Vision HERO Faris.

Vision HERO Faris is fusion material for many Heroes. He fits the name of HERO and attribute of Dark for the requirements of many Fusion Monsters from the archetype. You have a variety of options for your type of deck.