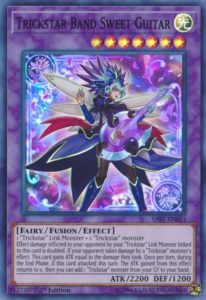 Trickstar Band Sweet Guitar doubles effect damage from your Trickstar Link Monsters to the opponent. This effect is the perfect complement for Trickstar. She increases pressure from your effects. You can quickly inflict a lot of damage with the proper combination.

Trickstar Band Sweet Guitar’s ATK returns to 2,200 during the End Phase if she attacked this turn. In addition, you may add a Trickstar from the graveyard to your hand. The second part of the third effect provides the most value. Her ATK returns to its normal level, and you can increase it during your next turn.

Furthermore, Trickstar Band Sweet Guitar’s ability to add a card from the graveyard is a nice advantage. You regain a card that you have already played during the duel. This effect enables you to replay the monster