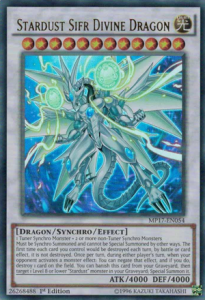 1 Tuner Synchro Monster + 2 or more non-Tuner Synchro Monsters
Must be Synchro Summoned and cannot be Special Summoned by other ways. The first time each card you control would be destroyed each turn, by battle or card effect, it is not destroyed. Once per turn, during either player’s turn, when your opponent activates a monster effect: You can negate that effect, and if you do, destroy 1 card on the field. You can banish this card from your Graveyard, then target 1 Level 8 or lower “Stardust” monster in your Graveyard; Special Summon it.

Stardust Sifr Divine Dragon provides divine protection to all of your cards. Its first effect prevents your card from being the destroy each turn for the first time that it is destroyed by battle or effect. It makes your opponent work harder to defeat you. The first effect is effective against control decks. Furthermore, your opponent must attack a monster twice to destroy it.

Stardust Sifr Divine Dragon negates an opponent’s monster’s effect and destroys one card on the field. It can be used during either players’ turn. This is a very strong effect, and turns the game in your favor. Your opponent’s strategy fails on all levels in the game. His or her monster’s effect is negated. Then, one of his or her cards is also destroyed.

In addition to its strong effects, Stardust Sifr Divine Dragon is a very difficult card to summon by following its requirements. The more efficient method to summon it is by using Limit Overdrive. This card features the gimmick from the Yu-Gi-Oh! 5Ds. You only need an Tuner Synchro monster and a Synchro monster, and their levels must equal 12. Then, you can easily special summon Stardust Sifr Divine Dragon from your extra deck!