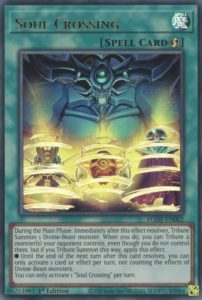 During the Main Phase: Immediately after this effect resolves, Tribute Summon 1 Divine-Beast monster. When you do, you can Tribute a monster(s) your opponent controls, even though you do not control them, but if you Tribute Summon this way, apply this effect.
● Until the end of the next turn after this card resolves, you can only activate 1 card or effect per turn, not counting the effects of Divine-Beast monsters.
You can only activate 1 “Soul Crossing” per turn.

Soul Crossing is a quick-play spell card with the effect of using three monsters from either player’s field for a tribute summon of a Divine Beast. This card’s purpose is saving your resources and using your opponent’s resources. It is an effective and alternative method for summoning a Divine Beast such as Obelisk the Tormentor.

In addition, Soul Crossing is a quick-play spell card. You may activate it during your opponent’s Main Phase. You may tribute summon the opponent’s monsters to summon a Divine-Beast during his or her turn!

Soul Crossing is a staple for Divine-Beasts. Any card with the effect to save your resources is a strong card for its archetype. Their  summons have a heavy cost of 3 monsters. Soul Crossing puts on the burden of the cost on the opponent. You save important cards for other plays in the duel.

In addition, Soul Crossing only allows you to activate one card or effect until the end of the next turn after this card resolves its effect. The only exception to this limitation is the effect of a Divine Beast. You will have limited options after playing Soul Crossing. You must wisely choose your next card to activate.

This simple strategy provides two advantages. First, you prevent the opponent’s tribute summon and they are unable to play their powerful monster. Second, you summon a Divine-Beast with their materials and you have the strongest monster on the field.

The main support for Soul Crossing are the Divine Beast. You want to play this quick-play spell card in a deck with Obelisk the Tormentor, Slifer the Sky Dragon, and The Winged Dragon of Ra. This card only fits in a deck for Divine Beast.

Spell Calling may add Soul Crossing from your deck to your hand. It grants access to your quick-play spell card when an opponent destroys it. It is a technical card and requires the opponent to destroy it.

Play these cards with Soul Crossing!