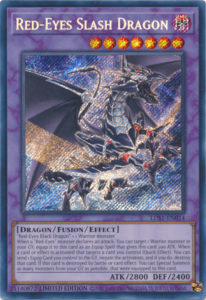 “Red-Eyes Black Dragon” + 1 Warrior monster
When a “Red-Eyes” monster declares an attack: You can target 1 Warrior monster in your GY; equip it to this card as an Equip Spell with this effect. ● The equipped monster gains 200 ATK.
When a card or effect is activated that targets a card you control (Quick Effect): You can send 1 Equip Card you control to the GY; negate the activation, and if you do, destroy that card. If this card is destroyed by battle or card effect: You can Special Summon as many monsters from your GY as possible, that were equipped to this card.

A Red-Eyes Black Dragon and a powerful warrior combine their powers to become Red-Eyes Slash Dragon. This Fusion Monster has three unique effects. Red-Eyes Slash Dragon uses warriors to unleash its full potential. It has a variety of effects to gain advantage. it can control the field and increase its ATK.

Red-Eyes Slash Dragon protects itself and your other cards. Red-Eyes Slash Dragon negates an opponent’s effect and destroys the card if it targets one of your cards. The cost is sending an Equip card to the graveyard. Cards with protection are valuable monsters on the field. You can prevent the opposition from countering your strategy.

Furthermore, you may activate the second effect of Red-Eyes Slash Dragon more than once per turn. You can consistently negate an opponent’s effects if you have multiple Equip Cards on Red-Eyes Slash Dragon. The first effect adds warriors to be the equip cards for the cost.