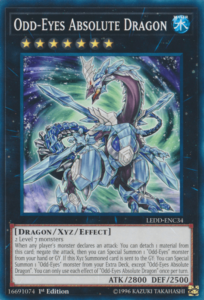 Odd-Eyes Absolute Dragon special summons one “Odd-Eyes” monster from your Extra Deck after an opponent destroys it by battle or a card’s effect. This is a fantastic card for gaining a monster on the field and protecting your life points. In addition, you gain a powerful monster with fantastic effects to swing the game in your favor.

Overall, Odd-Eyes Absolute Dragon is a useful XYZ monster for special summoning “Odd-Eyes” monsters. He gives major advantages to his player. He provides a nice defense by negating an opponent’s attack. You have the ability to special summon a powerful monster such as