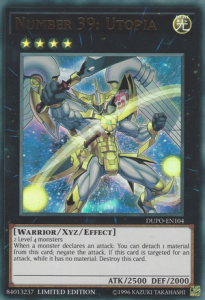 2 Level 4 monsters
When a monster declares an attack: You can detach 1 material from this card; negate the attack. If this card is targeted for an attack, while it has no material: Destroy this card.

Number 39: Utopia is the first XYZ monster in Yu-Gi-Oh! His introduction marked the beginning of the XYZ era in the game. Number 39: Utopia is also poster card for Yu-Gi-Oh! ZEXAL. In addition, he is Yuma’s favorite card in the series. The characters share a special bond in their amazing duels.

Number 39: Utopia is Yuma’s signature card in Yu-Gi-Oh! ZEXAL! He plays the card in many duelist during the series. Yuma and Astrial the only duelist able to play the card without being corrupt by the card. Utopia’s power will corrupt any other duelist. Furthermore, Utopia is the only Number willingly cooperating with Yuma and Astral.

Number 39: Utopia’s first effect negates an attack by detaching one material for this card. This effect helps your stale for time when you are a difficult situation. You can use this time to gather resources to counter your opponent’s strategy. Then, your counterattack swings the game’s momentum in your favor. Furthermore, you can use the ability at least twice with the original materials.

Play these cards with Number 39: Utopia!

However, Number 39: Utopia’s second effect is its Achilles heel. If your opponent attacks Utopia without any materials, then Utopia is automatically destroyed. This is one of the worst effects from a main character’s card. There is no need for this effect to exist. Utopia’s ATK is within a good range, and it can be destroyed by battle. Many monsters are stronger than Utopia.

Finally, Number 39: Utopia has a lot of support cards for his archetype. This is not surprising fact because the main character’s card always receive support. There are stronger versions of Utopia such as Number C39: Utopia Ray and Number C39: Utopia Ray Victory. Utopia is one of the most popular archetypes from Yu-Gi-Oh! ZEXAL. I expect more support will be released for many years to come.

Overall, Number 39: Utopia is a decent card for a main protagonist. Its first effect is an effective and defensive effect. It stales time for you can make a comeback. However, its second effect is a tremendously bad. The effect is unnecessary and the card would still be balanced without it. I only recommend playing this card in a deck dedicated to Utopia.