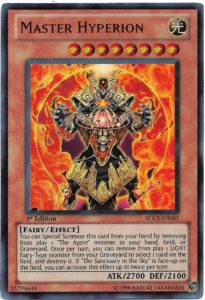 Master Hyperion is the leader of The Agents and the main card in Agent decks. They are a powerful group of fairies and they reside in the Sanctuary in the Sky. He is surrounded in a blaze of glory. No weak mortal can survive the onslaught from this almighty fairy. He was first released in Lost Sanctuary Structure Deck and later reprinted as a gold rare in Gold Series: Haunted Mine. I bought my one and only copy of Master Hyperion from the structure deck.

Finally, The Agent of Miracles – Jupiter can increase Master Hyperion’s attack points by 800. His attack will become 3,500 until the end of your turn. Also use Jupiter’s skill to special summon banished fairy-type monsters. Bring back The Agent of Mystery – Earth from the banished zone to draw another Master Hyperion from your deck. Master Hyperion can be summoned afterwards to complete your formation.

Overall, Master Hyperion is a fantastic card and has aged well in today’s game. He is one of the best ultra rare cards from a structure deck. His effects make him a great card. He can easily be special summoned to the field and he has the ability to destroy your opponent’s best cards on the field. Maximize his potential by playing  The Sanctuary in the Sky. Destroy or save the universe with Master Hyperion and The Agents!