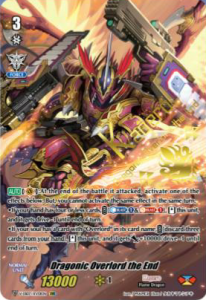 [AUTO](VC):At the end of the battle it attacked, activate one of the effects below. But, you cannot activate the same effect for the same turn.
• If your hand has four or less cards, COST [Counter Blast (1) & Soul Blast (1)], [Stand] this unit, and it gets drive -1 until end of turn.
• If your soul has a card with “Overlord” in its card name, COST [discard three cards from your hand], [Stand] this unit, and it gets [Power]+10000/drive -1 until end of turn.

The End is Never Ending

Dragonic Overlord The End’s first effect stands him and he loses one drive until the end of your turn.  The additional attack has one drive for an opportunity to check a trigger. A trigger adds more power to your vanguard to surpass your opponent’s shield. The effect can only be activated if you have four or less cards in your hand. You can decrease your hand’s size by calling rear-guards during your main phase. Furthermore, you can decrease your hand size by using the second effect!

Play these cards with Dragonic Overlord The End!

Dragonic Overlord The End’s second effect requires you to discard two cards, and he stands with an additional 10,000 power until the end of your turn. I recommend using the second effect first to set up the first effect. You are discarding three cards to meet the first effect’s requirements, and Dragonic Overlord The End gains 10,000 power. The additional power with a Force II marker adds a lot of pressure on your opponent. Your vanguard will have 23,000 power and two criticals before your rear-guards boosts the vanguard.

Furthermore, you can use both effects during the same turn to initiate three attacks from your vanguard. This is a very powerful combination in the late game to finish games. Three consecutive attacks for a vanguard overwhelms an opponent. Give Dragonic Overlord The End a Force II marker to increase the pressure on your opponent. Your vanguard would constantly pose the threat of dealing two damage.

Play these cards with Dragonic Overlord The End in the premium format!